I’ve had a busy weekend working on small projects. I’ve finally scraped back and sanded the door and window for the garden shed. I’ll try to undercoat it this week. Mr F doesn’t understand why I’m doing this when we don’t have a garden shed. I know he’s right. We can’t begin building it until we know exactly where the concrete slab will finish for the house and pergola area. I’m just getting a head. I’d like it to be ready when he’s ready. 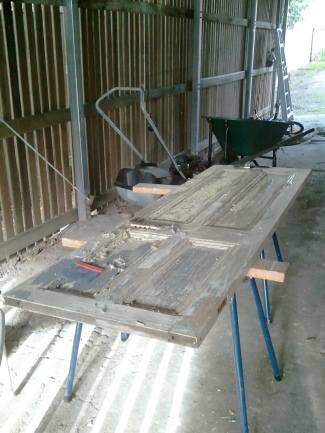 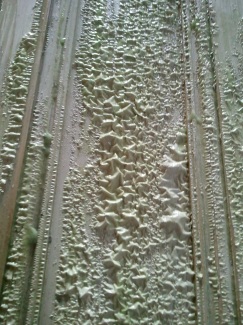 I also re- oiled the dining table.  Two weekends ago I sanded it back and just never finished the job.  It looks, feels and smells  amazing.  We’ve had this table for over ten years.  It was made for us by a very talented Dutch woodworker using recycled timber from an old nursing home.  We wanted something solid that could stand up to constant use

It certainly has proved itself to us.  It been used as a stage for ‘rock concerts’, celebrations, homework and building projects (lego). It bares the scars but it just adds to the table’s story.

A few years later we went back to the small shop to arrange to have a cabinet designed and built but sadly the woodworker had passed away from cancer.

At the same time, (it was 2002) we brought these chairs from an office furniture shop.  They weren’t cheap (at the time we were living off one income, I was pregnant with number three) but we like ‘woo hoo’! ‘they’re made in Italy’!!.

Plus we thought we were being ‘a bit clever’ mixing plastic chairs with a timber table.  So it’s been eleven years and they’re still going strong.  They’ve also taken a battering, (cubby houses etc..) but nothing that a bit of Jif and elbow grease won’t get rid of.  Plus we still like them!!!

2 thoughts on “My productive weekend.”