I’d like to share with you a very different style of ‘window dressing’.  It’s made from hundreds of cardboard tubes from toilet rolls.

The window is in the bedroom of the oldest son of my friend’s house  from work.   Like me, she also  has three sons .

Her boys have their own bathroom in the house and when  they’d used the last of the toilet paper they’d leave the empty tubes on the floor of the toilet.

My friend refused to pick them up and the boys rather than throw them in the rubbish would stack them into a pyramid which was knocked down by my friend every time she cleaned the floor but  rather than spend a minute throwing them out, they would spend ten minutes re building the pyramid.  This was a battle of wills.  I would have gone crazy!!!!!

Over time the pile  got too big for down beside the toilet so the pyramid of toilet rolls  was  moved to a corner in the bathroom then eventually  into the bath tub. This  took a couple of years to collect !!!

My friend who feels she is ‘pretty  tolerant’ had  finally had enough and it was” either in the bin or his bedroom” (the oldest son), so they were  moved into his bedroom window creating this rather interesting but if somewhat unusual window dressing.

At least she says, she doesn’t have to look at them everyday!!! He can’t close the window though so he has had some cold nights over the winter.  The coloured areas are cupcake patty cases.   Sooo, what do you think?  I think it’s cool! 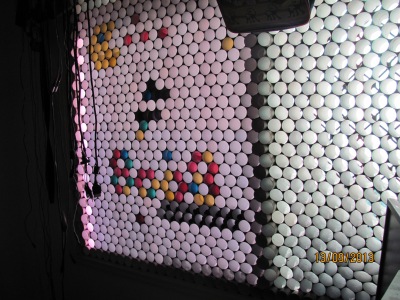