It has been quite a few months since our 14-year-old was able to move into his new bedroom that used to be a kitchen and I thought an update was long over due.

The photos aren’t the best but I hope that you’ll be able to see what we’ve done.

The photo below is what the kitchen looked like a year ago. 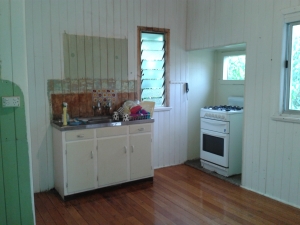 And this is what it looks like now. I found the old set of drawers on Gumtree.  They sit in the old alcove where the oven used to be.  The old slab of terrazzo has been left as a reminder of what the room once was. 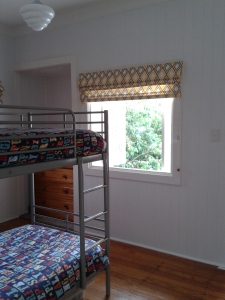 The old possum house (the cupboard at the top) has been sealed off and the old pantry has been cleaned and painted inside and is now a wardrobe.

The old back door and ‘dunny’ have gone and replaced with a lovely little study nook. 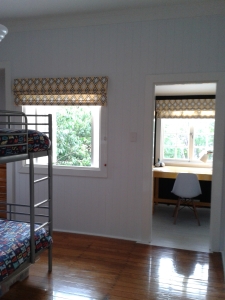 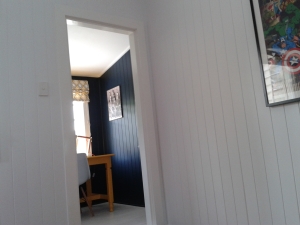 The table was given to us by our neighbours who were moving out and it was on its way to the dump!!! I stripped it back and painted it yellow. 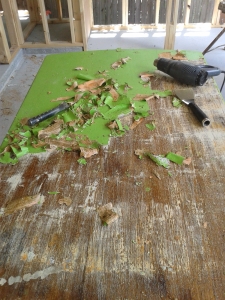 I found the fabric for the blinds at Fabric.com. I was looking for something that would suit a teenage boy and not look out-of-place as he grows into a young man.   The fabric  was  $8.47 US per yard.

This is a great price as many of the fabrics that I’d looked at here in Australia were around the $30.00 mark for similar fabrics.  Shipping to Australia was approximately $30.00. We needed quite a few metres for the three windows, yet the total bill (including shipping)  was under $100.00!!!

Just recently, I bought some shelves for the study nook at the Freedom mid year sale.  They were too hard to photograph so I’ve borrowed the image from Freedom’s website!!! 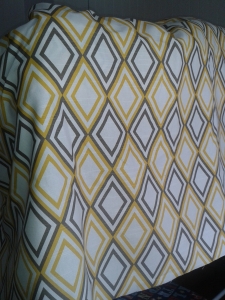 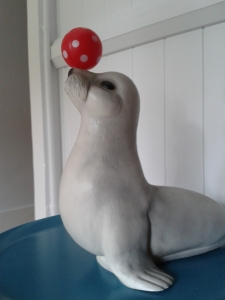 The old kitchen is SLOWLY being transformed into a new bedroom.  We are taking the time to strip back all of the timber walls (tongue and groove).  It’s an incredibly slow and laborious job but it will be worth it in the end.

We found an interesting message written on the wall under the paint, on the original timber.

It’s hard to make out in this photo but it says “shouldn’t take us long”….but of course the big question is … what was it that didn’t take long?

Was it nearly ‘knock off time’ and the ‘chippies’ building Pearl’s house were keen to finish the job and call it a day?  After all they may have been in a hurry to finish  as the pubs in Australia closed at 6.00pm back then.

The photo above was the closest pub to the house during the time the house was being built.  However it was demolished in 1959 and was replaced with this ugly thing!!!

I haven’t had a lot of spare time to update this blog recently as we’ve been so busy getting the house ready for the builders. The first thing we needed to do though, was find somewhere to live.

We put an ad on Gumtree and fortunately for us someone responded to the ad and are happy for us to bring the two cats with us.  I really hope it works!  The flat is under her house and she has a cat of her own.  Fingers crossed the three become the best of friends.

The builders are going to start ripping out all the old fittings and ugly windows in the kitchen  and sleep out this week.  The kitchen will now be located downstairs and this room will be middle son’s bedroom. 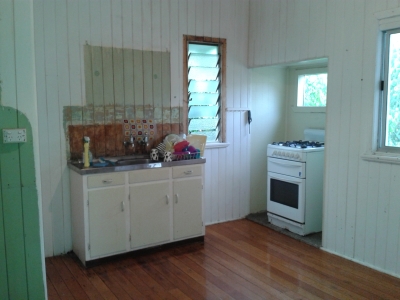 The room is empty except obviously the kitchen sink/cupboard and the oven.  Looking at it like this has had me thinking  about what it must have looked like when the house was first built.  I think they probably had a table under the window and perhaps a cabinet like in the picture below.

I’ve been looking online for some images to share and found some fantastic ones at the National Archives of Australia website.  Life was certainly different when this house was built.   I’m sure Mr & Mrs Jenkins had a few afternoon teas together in our kitchen Like this cheerful couple.

It may not be very interesting to some but to me its been quite special  finding  these small bits and pieces.

The brightness of the lino is so cheerful.  It was under some stinky cupboards in the kitchen.  There was newspaper under it but it’s still stuck to the floor.  The coins and the comb were in the main bedroom, wedged between the skirting boards and the walls.  the plastic lion and the broken fork were buried in the garden.

The bright lino teamed up with the original green on the walls would have made it a very  colourful kitchen.

Someone described the suburb we  were about to move to as a “Possum’s paradise”.
Knowing this should have prepared us but what sounded like a pack of dogs running on the roof scared the crap out of us on our first night in the house. 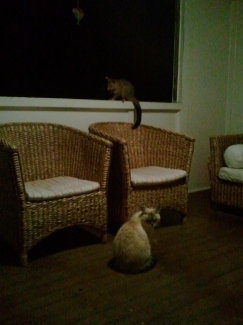 We have two and only two cupboards in our kitchen and we don’t use either of them. Why? because the insides are gross and had a weird smell, so we just put an old ‘meat safe’ in front to use as a pantry and pretended they weren’t there. 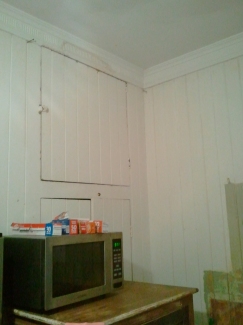 I’m not sure which member of the family opened the top cupboard to investigate one day and discovered a possum sitting inside. The top cupboard has the only access to the roof.From the state of the inside of the cupboard it looks like its been a home to many generations of possums.
Now at this point in most people’s stories about possums in the roof, a trap would be borrowed and the possums evicted! 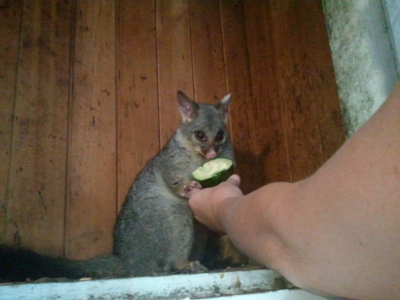 So one day in winter when we were opened the cupboard ( you have to climb on a chair and stand on the kitchen bench) we discovered that Possum had become a mummy. For the past six months we have all watched  ‘baby’ grow. It’s been really quite special and we’ve enjoyed being able to hand feed and stroke them.  We’ve learnt that they’re actually very clean animals and also very friendly. (they’re not idiots – they get feed). 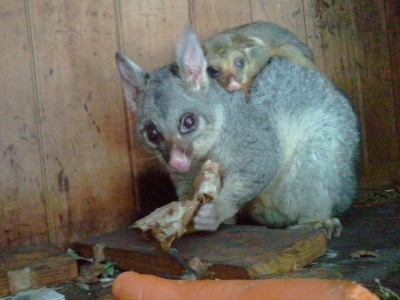 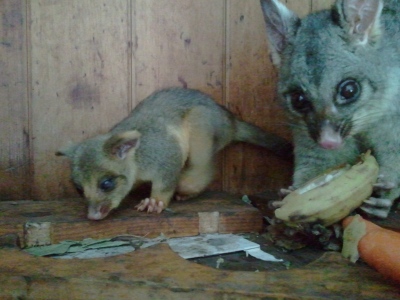 I’m sure there will be someone reading this who thinks we are doing the wrong thing and interfering with nature and prehaps we are. It’s just been really special being able to share this with my children and its something that I know they’ll remember for a long time.

Until we know what we are doing with the house, we are happy to leave them be.  Apart from coming home every morning around 4.30am and making a bit of a racket.  (I wish we could teach them to tiptoe)  They’re not bothering us at all.

The house itself is quite compact.  When we came to look through the house for the first time the tenants were home and it was kind of awkward.  It was a very quick visit but we knew that it had potential.  It still had some original features like VJ walls and picture rails. 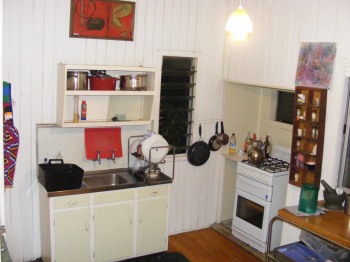 The block is ’16 Perches’, 405 sqm.  Yet the house is sitting quite close to the road which leaves quite a nice sized back garden.  Our first idea was  to push out from the kitchen and create a new living space.  After all the paperwork was done and we’d officially brought the house we contacted a building designer who had been recommended to us and he came to the house to help us work out what to do.

We told him that we needed to keep it under a certain price.  He explained to us that extending a house could get expensive and to use the footprint of the house would be cheaper.  So his idea was to raise it higher than it currently is and put the kitchen and living area downstairs.  Ok, we were cool with that.  He drew a rough sketch with us standing there.  It looked amazing and we got all excited.  The following day he sent us a better drawn ‘rough plan’ .

He seemed really motivated and we thought ‘this guy is young, fresh and eager, let’s go with his ideas.  So to cut a long story short.(its been a year, because the guy was growing a moustache.  So it was November)  He asked us to come into his office in Teneriffe.’Dahling’ and presented us with the plans.  The plans did look good and for the price of a trip for two to somewhere exotic they should have. 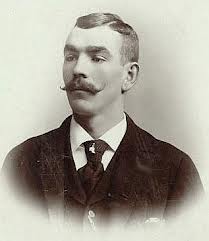 After throwing a few insults at us and showing more interest in the Friday night drinkies happening behind us we got up to leave.  His last remarks as we walked out of his office were  ‘ Yeah I think this is going to cost more than what you wanted to spend’. ….’Sorry??? Are you serious ?? did you listen to anything we had to say??.  We left and thought ‘well that was a waste of time and money.’ it was said with a lot more of #%!!*>these words though.  We left him to join the rest of the boys with their moustaches and Boutique beers.  What a jerk!!!!

As soon as the Christmas/New Year was over and everyone was back at work, we started getting quotes from builders.  The quotes were coming back $50 – $100K more than we could afford.  We just threw up our hands and walked away from the whole building ‘thing’ for a few months and focused on tidying up the house.  Mr F and the Older Mr F got stuck in and painted the lounge and dining area.

We have used Dulux – White on White in these rooms.  In the last house we used Dulux – Fair Bianca and it seemed too close to cream for us.  We are happier with this  new white.

The orginal ceilings in the house are really interesting.  Each room has a different design.  the lounge and dining room ceiling are quite Art Deco in style yet the kitchen, and bedrooms are classic and pretty.  They were in pretty bad shape but each night before we moved in, Mr F would get stuck in after work.  He’s done a beautiful job in the main bedroom, dining and lounge room.

The lights obviously needed replacing.  We went all over Brisbane looking for something suitable. Restoration Station on Waterworks Road, Ashgrove have a fantastic range at prices for all budgets. 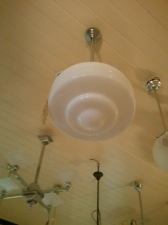 The lights had to sympathetic to the age and style of the house and so we chose the lights (far right).  And here is what they look like installed.  We are happy with them.  Nice and simple.