The builders arrived on Tuesday last week and began to create a walk in wardrobe (WIR) and ensuite for the main bedroom upstairs.  It’s very hard to show what they’ve done with photos but I’ll do my best. 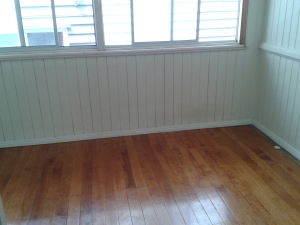 The really bad photo above is trying to show a room that is known here as a ‘sleep out’ it would have had timber Louvre style windows running the length of it but sometime in the late 70’s or early 80’s they were replaced with aluminium sliders.

A  ‘sleep out’, here in Queensland, refers to a room that is  an enclosed verandah. ‘Sleep outs’ were originally created for extra sleeping space  and is meant to be cooler than the main house.  A ‘sleep out ‘ was either part of  the original construction of the home or quite often a  verandah would be enclosed.  The photo above is one I’ve found on google.  I love the old lino.  Judging by the slope of the ceiling this must have been a verandah originally. 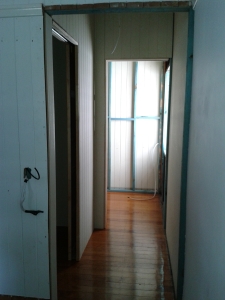 The photo above shows the new opening from the main bedroom to the future ensuite and WIR.  We’ve chosen not to have a door put on but instead have doors on the WIR and ensuite.  It will make the room feel a little bigger this way.

The builders are very tidy.  The photo on the right is my attempt to show you what is happening in the kitchen.  This little room is going to become a study area off the bedroom.  It was up until last week, a toilet and the back door.  The small window will be replaced with double casement windows.

The possum houses are at least providing a shady spot for a neighbourhood cat.  This cat is called Echo.