It was about this time last year we cleaned up and repainted the front porch.  It looked really good for a few weeks and then the builders damaged a lot of the paint work when they were using the porch to cut timber (very careless). 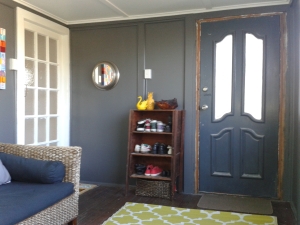 Anyhooo… we finally got around to painting the area where the front door used to be and hang up this very large chalkboard.

We’ve had it for quite a few years now.

It came out of Mr F’s classroom, and was being replaced with a whiteboard.  It was destined for the skip bin!!!   Once home we discovered that it had originally come from the school a few minutes walk from home.  The school that Mr F teaches in another part of Brisbane, a good half an hours drive.

Now it’s back in the same suburb it came from originally and is hanging proudly in the porch!

Last night after dinner Mr F was marking a pile of school books and read something out to me that made him chuckle.  It was an answer to a maths question.

I had 14 lollies and I wanted to give them to two children.

How many hats do they have each?

I thought it was gorgeous and wanted to share.  The ages of the children in his class are seven and eight.  (lollies = candy).